This interview provides a portrait of a parent’s extraordinary devotion to his son,  now in his midthirties.

As a child, Holden was happy, in fact ebullient, with a sense of humor. He was always sweet and caring. In his teen he grew rather serious. Like his brothers, he was home-schooled, in part because all three had learning disabilities/neurological problems. Holden had auditory processing problems that made it hard for him to understand directions. He was a sensitive child and young man, serious about religion, a wonderful athlete and skier. He had no trouble with drugs or alcohol. He had friends. He was the last person, a friend later said, you would expect to have a psychotic break.

At college he majored in music and graduated with honors. He played guitar, as well as bass, drums, and keyboard. He was able to earn his living as a musician. People say you can’t do that, but he did. He rented a room in the house of a friend and was able to line up students, and also to compose music for theater and perform himself.

Then we got a call from the friend who was renting him a room. She was concerned that he was depressed, worried that suicide was a possibility. When we saw him, he explained that he was on trial by the CIA and attack was imminent. There was a SWAT team rappelling up the side of the building.

How did you feel at that moment?

I almost had diarrhea. I was devastated. For a time I cried a lot, I was sad.

He agreed to check himself into a psychiatric hospital. After five weeks of treatment, which I think now was mediocre, he transitioned to a day program, and then he resumed his life. He found students and went back to working for several studios. But he was rather isolated because he was working so hard.

Four years ago, when I was teaching at a seminary, he had another break. He hasn’t recovered. I’ve been able to relocate to a church in a small town. It has a rectory with enough room for us and Holden. The people close to the church have been very kind.

I did some research and found that the United States doesn’t have good long-term outcomes for people with mental problems. The place that has the best outcomes is Western Finland. That’s where Jaakko Seikkula pioneered the Open Dialogue approach we’re using now. The idea is that the kind of problems Holden has are the result of trauma. The goal is to rebuild the person suffering and his relationships. We meet with our therapist in person or by Skype. Sometimes Holden’s brothers join us. In the beginning Holden wouldn’t join the conversation. For the past three months, he has been talking in our sessions with our therapist. I hope he will become an agent in his own recovery, that eventually he will have the capacity to thrive in society. 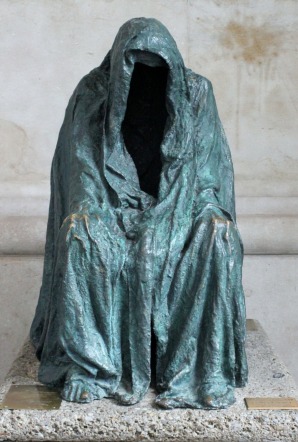 I see Holden not as mentally ill, but as someone dealing with hurt in his life. I don’t think it’s a matter of bad genes or a broken brain or bad chemicals. We all hear voices, we all get paranoid, we have times when we’re down, we get manic. But he’s stuck. He’s an ordinary human being who’s experiencing extraordinary circumstances that cause severe mental distress.

I do think there’s the genetics of temperament. His sensitivity is important. That’s the psychological component. There’s the sociological. He chose work that was very stressful—it was hard to make a living. There’s a spiritual component—issues of meaning and purpose.

What do you see as the “extraordinary circumstances” that affected your son?

When he was eight we moved to a new church. It was not a healthy church. I spent a lot of energy trying to heal it. That move hurt him—the move itself, and my preoccupation with the problems of the church. That is part of the problem.

Another trauma was a consultation with a specialist about an unusual spinal condition. He was in his teens then. The doctor tried to scare Holden into having surgery, told him he would die young if he didn’t agree to it. He fainted.

How do you feel about all of this? How do you deal with it?

I still don’t sleep well. I don’t have the concentration to read and write the way I used to. Living with Holden is the most challenging thing I’ve ever done. It’s easy to be impatient. I feel I’m always off balance. Carol has lost weight, too much. We try to get out together. I have a spiritual advisor. Carol goes to a support group.

What is a typical day?

I try to love him. That’s the best option. But there is no typical day. We don’t have routines. Holden takes his medication inconsistently. It doesn’t take away his delusions, but it sedates him. On Sunday he took a shower, the first in months, and attended church and coffee hour. Carol and I had lunch. We went out for a drive to the farm stand. Holden didn’t eat all day. Sometimes he doesn’t eat or drink for days. He went up to his room and lay in bed saying his mantra. He repeats it endlessly as he paces around the house. “All the pictures you’ve shown me are unacceptable. All the pictures you’ve shown me are unacceptable.” The pictures are beamed to him from Hubble.

Carol went up to ask him to drink some water. I didn’t know what to do. At nine I went out for pizza. I went to bed at midnight. I didn’t sleep very well, but I had to get up next morning for morning prayer and communion. Carol stayed up till 1:30, and finally persuaded Holden to eat something and take his sleeping medication. Now he’ll sleep most of today.

Do you feel responsible for Holden’s problems?

I hear a lot of confessions. I’ve found there are two kinds. There’s the person who explains why he himself didn’t do wrong. And there’s the person who feels responsible for everything that happened. I feel it’s important to see where my responsibility lies and live with that truth. I have made mistakes. But I feel forgiveness by God.

What would you like people to know about your experience and your son’s?

This happens to a family, not an individual. The family needs support. A lot of support. You’re being hurt—hurt everyday.